Trained in the use of Blasters, including Heavy blaster pistols.

“She has curves that even make Twi’leks jealous.” – Admiring Bar Patron

Neris as a child experienced a near fatal accident, causing her to lose the natural empathic psychic gifts that most all of her fellow Zeltron race have. Neris lacks the party-animal attitude most Zeltrons have as well as a direct result from this. Unable to feel the bubbly joy of others or appreciate the way her natural pheromones induce such feelings in others, she instead focuses on things that make her happy…things like wealth and power.
Her enigmatic past seems to be a closely guarded secret to all but a very select few. Neris isn’t beyond acting like the typical Zeltron to avoid suspicions or to blend in with a crowd. She will grab someone’s arm and pretend that person is actually interesting, a deception she plays too well from years of trying to ‘blend in’ on her home world. Neris seldom warms up to anyone genuinely mostly because she does not want to be hindered by the emotional ties that she feels cripples other Zeltrons.
While not anxious to become close to anyone, that does not stop her from making lots of friends who desire quite the opposite. Neris seems to have a great number of people wrapped around her finger, contacts everywhere, all willing to do her favors. This has opened many unusual doors and given her freedom to operate in the underworld in many places others could not. Some who have known her the longest say her claims of not having psychic ability are bunk, as they see her turn the attitudes of even the most hostile potential opponents into grinning bumbling putty in her hands. 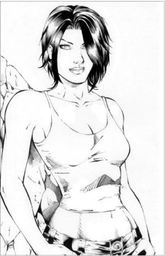