Antar Volaris is a natural leader with a talent for maximizing the potential of his comrades. He is confident and brash, but always values others over himself. Because of his humble beginnings and street racing experience, Antar knows how to act tough when he needs to and relates well to those who were not born into wealth. Antar is inventive, always looking for the not so obvious solution to a problem, and no matter how dangerous the situation, Antar hates backing down from a challenge. Nothing in the galaxy matters more to him than his family. 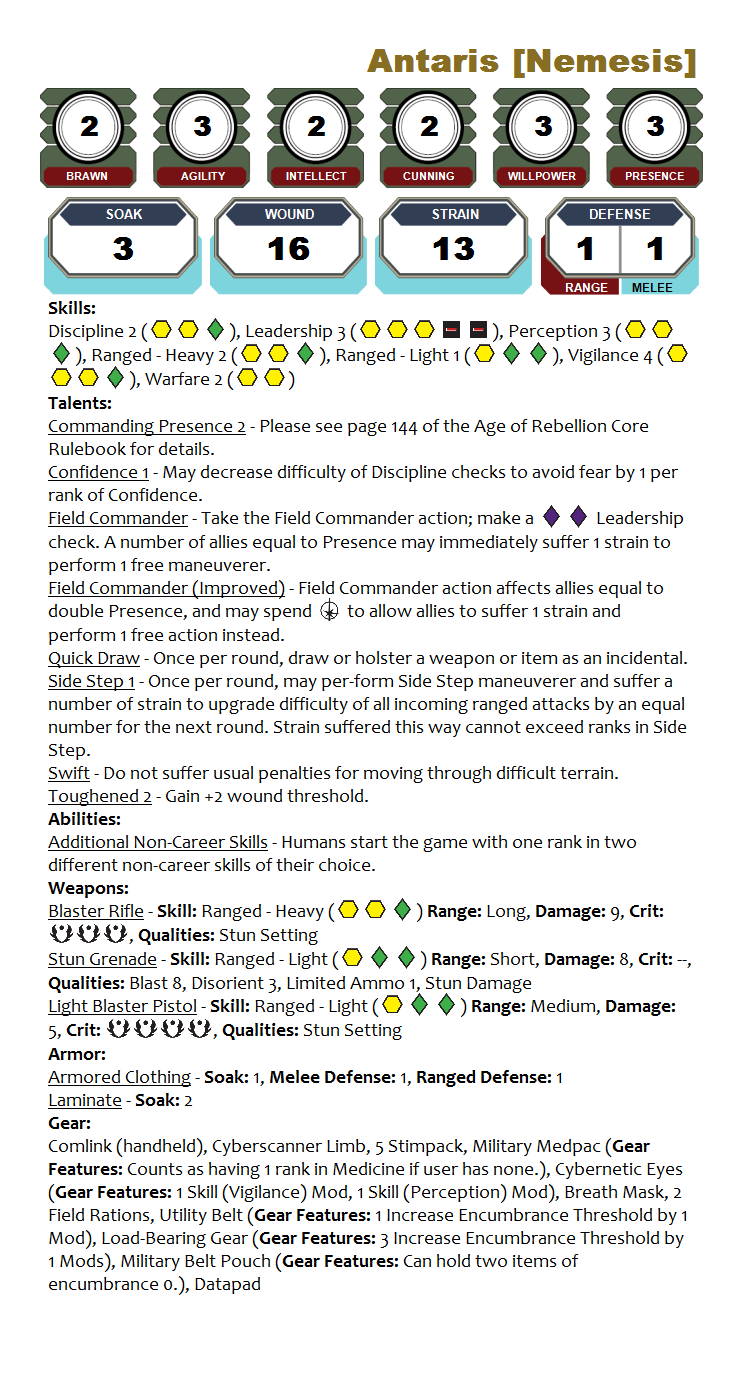 Back Story:
“Do you like it daddy? I drew it at school. It’s an Impureal ship like yours.”
“It’s beautiful, you are becoming quite the artist Mira.” Antar gave his daughter a hug and quickly patted her dark obsidian hair as she ran off playfully into the distance. Her brilliant sapphire blue eyes sparkling in the sunlight just like her mother’s….
“You have a visitor,” whined the monotone femine voice of the ships computer. Antar rubbed his eyes as he switched on the lights to his quarters. Taking a moment to adjust his appearance he made his way to the door. As the door slid open, he was confronted by a young blonde security officer. “Get dressed, you need to leave this ship now!”
“What is going on? What happened?” asked Antar, his eyes still adjusting to the light.
“I will explain on the way, but if you don’t leave now sir, you will die.”

Antar quickly changed into his uniform and grabbed his bag. On the way to the hanger, the security officer filled him in on the situation. “Lord Vader is currently en route in response to our recent failure, and you, sir, are being blamed for it.”
“What?!? The admiral still refuses to give me any responsibilities, because of my ‘inexperience’.”
“I know, but that doesn’t matter. All of the ship’s records have been changed to confirm your involvement. Knowing Lord Vader’s reputation, he will probably want to make an example of you. I called in a few favors and have a shuttle waiting for you in bay 3. You are a good man Commander, it is a shame to see you go, but you don’t deserve to die for these scumbags.”
“What about you, won’t they know that you helped me escape.”
“Don’t worry about me, I’ll be fine. Good luck.”
Taking the shuttle, Antar set a course for the smuggler’s moon of Nar Shaddaa, hoping to lay low until he can figure out what to do about his current situation. As his ship jumped to hyperspace, a thought crossed his mind, “Oh no, Sera, Mira…I need to get to them before the Empire does!”

History:
Antar was born on Corellia to a low-mid income family. Antar’s father worked as a mechanic in the construction yards and his mother was a homemaker. He has a younger brother that has always looked up to him.

In his late teens, Antar joined an underground racing team after befriending one of the team’s mechanics. He later became the team’s leader.

Antar enlisted into the Imperial Navy along with a few friends from his team and attended the Imperial Academy. Because of his excellent leadership abilities, he was recommended for additional training as an officer, a privilege not usually offered to an enlisted man at such an early point in his career. He later graduated from the Imperial Navy Officer’s Academy with high marks and excellence in leadership.

As a lieutenant, Antar served on the Imperial Cruiser Spire under the direction of Captain Julius Wise. Wise was a humble man with a good heart who became a father figure for Antar.

Along with a promotion to Commander, Antar was transferred to the Imperial Star Destroyer Juggernaut, where he was looked down upon by his superior officers for his lack of noble upbringing. They especially detested how quickly the other crew members grew to like Antar. 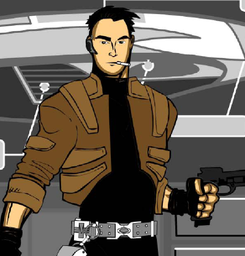